Recently BBC’s ‘Trust me I’m a doctor’ series highlighted all the health benefits of eating turmeric. Turmeric contains various active ingredients called curcuminoids.  Curcumin is the curcuminoid in turmeric that has received most research interest.

Dr Mosely and his team conducted a small clinical trial to measure the effects of a daily intake of turmeric.What they discovered was both exciting and unexpected. Tumeric had a significant effect on a particular gene that goes by the name of SLC6A15. This gene could be related to a diverse number of health problems. These include depression, anxiety, asthma, eczema and perhaps even cancer. 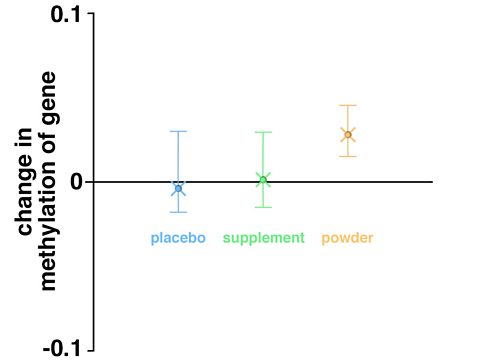 How you eat Turmeric makes a difference!

You can see the results of this trial in the graph to the left. This shows the effect of ingesting turmeric on SLC6A15.

However, the exact way that you ingest turmeric influence its effect. Taking turmeric as a supplement (swallowed in a capsule) does not have any effect. The supplement had exactly the same as if you had taken a placebo, which is an inert substance. However eating turmeric as a food by cooking with it, created the greatest beneficial effects. The absorption of turmeric can be incresased further when you cook it with oil and add black pepper – yum!

The graph does show a difference in the average measurements between turmeric food compared with both the placebo and the tablet forms.  However, I cannot find any explanation or key that explains what the whiskers (thin lines) represent. This makes it difficult for my inner geek to interpret these data more fully.

Do watch this clip from the show which show Dr Moseley interviewing the researcher; it makes very interesting viewing. Now where’s that number for the local curry house?